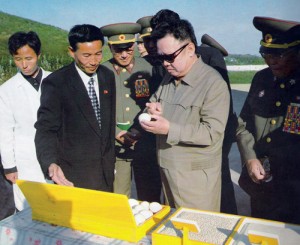 The passing of Kim Jong–il the supreme leader of North Korea this december wasn’t a shock or surprise, it mainly made me think. It interested me, the whole idea of North Korea interested me.
After reading an article about the tourism of North Korea and how each vistor is accompanied by a guard who shows the traveller what he/she is permitted to see.
So in turn people are watching a trailer of what Kim Jong-il wanted them to see.
I also heard (because most of it is speculation) that when looking from South Korea the
North have constructed fake ‘picture perfect’ towns, to make the Southerners jealous. Genius.
From what I can tell, the man was a legend, i’m talking Beatles big, Elvis big, even, dare I say it…
Justin Bieber big! How one country in the whole world, was able to build up this hype of secrecy
and individuality, with a army to scare the biggest nations and nuclear warheads to demand
attention. It’s interesting how sooooo little is known about such a big ego, that is North Korea.
You have to respect the attitude I guess, I’m guessing all isn’t as it seems in the country, but I’ve
never been, so who am I to say? I get fed the anti North Korean media we publish here, not that
its always headline news.
Anyway, the death of Kim Jong-il caught my attention in the build up to Christmas and the reaction
of the people made me wonder? Whats it like to live inside the iron fist? How real are these tears?
What will happen next? Will Kim Jong-un look at things the same way his father did?
Anyway I hope the people of North Korea are happy and still able to enjoy the cold weather that we
didn’t get at Christmas…
Share this:
895
0