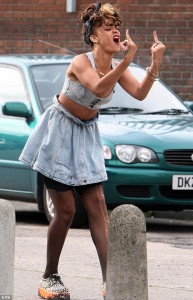 After the release of Rihanna’s new music video “we found love” I have watched it a gazillion times, the edited version on TV and the unedited one someone stuck up on YouTube. Everyone I have chatted to has slated it, saying its dreadful, its not that good. I’m from Northern Ireland, the same place the video was shot, so the people I have talked to seem to think the video is somewhat saying that Rihanna thinks Northern Ireland is “hopeless”. I tend to disagree, what I think Rihanna is saying is that LOVE can be found anywhere, slums, crack dens, mansions, hotels, jail it doesn’t matter, hopeless doesn’t mean a “bad” place, I think with her video set in the New Lodge council estate in Belfast is as good a place as any to say that happiness, that joy and ultimately LOVE can be found here, there or anywhere. “Yellow diamonds in the light Now we’re standing side by side As your shadow crosses mine What it takes to come alive” The video is about 2 young people dealing with life, drugs, sex and money. It’s unfortunately a part of growing up to most (not all) and Rihanna touches on all these points, ultimately the video leads to the couple breaking up. Something young couples also usually experience. Would we rather have loved and lost than never loved at all….the creativity and Requiem of a Dream style direction of the video is why I like it, artistically the video is exciting and for me I would rather watch the audio with the video rather than listen to the audio by itself, it is like watching a short film. I don’t think video’s like this promote drugs and sex, because if people didn’t talk about it, we would think about it. Anyway, without going on to much about the most beautiful young couple dancing in a field in Ulster and growing up in the New Lodge I will leave it at that, the video is art. Art gets people talking, and thinking. “We found love in a hopeless place” peace, G