Im really not to sure where I heard the statement recently, but its an interesting one at that. There has always been a stigma or stereotype around people that “play God”. Movies and Tv shows have documented how certain experiments have boundaries, they highlight issues for example abortion or cloning…then as a good bit of television usually does, it sit’s on the fence, trying not to offend anyone.

I’m pretty sure I heard the phrase “doctor playing God” comment on a TV show recently, it was talking about how even the slightest bit of medicine alters your life. It was saying that as soon as we go to hospital, and a doctor gives us say antibiotics, that the doctor, in turn, is playing God. They step in and change what might have been. They decide what medicine or treatment would be best for the individual concerned.

The reason why I find the statement interesting is that it’s kind of true, say you go to 12 doctors with the same problem, the chances of them all saying the exact same thing and giving you the exact same medicine and exact same treatment is probably slim enough. I’m not a doctor, so I might be wrong, but I am a human and we have to allow for error and that means their is a chance, one of those 12 doctors could make a mistake and his/her decision could alter my life. Does this mean they are playing God?

Most TV shows, movie would point at mistakes, or things that are not accepted socially. If a doctor makes a mistake it’s a huge deal, they can lose there job or worse, lose a patient. So what does that mean, is it okay for a doctor to play God if it benefits the person? If I was sick and the antibiotics worked? If that was the case the word “God” is barely used, it’s normal for people to get better. People expect to hear good news, always the victim.

God creates, Dinosaurs, God removes Dinosaurs, God creates humans, Humans create dinosaurs. This was more or less the quote I heard when watching Jurassic Park. Now considering its a fictional movie with no possibly of actually happing (as much as I wish it was a true story…) I tried to understand the quote in a different light. Say we successfully create a clone of a human, we create life. What does that mean? Do we play God? has God given us the will to evolve and design reproduction.

Now say you don’t believe in God, not much of what I have blogged about really maters. Say, we have no possible way of playing God, because God doesn’t exist….how do you create a soul? a sense of being? something completely unique?

I do believe in God, I’m a christian and believe that we have free will however I’m not to sure how to define the “free in free will (if that makes sense). God to me is supreme and in control, so theres obviously boundaries to the statement of ‘free’. That in turn is a different blog altogether.

So to summarise these random thoughts, does a doctor play god? Yeah, we can all play god if we want, we can change the lives of others, we can change nature to a certain extent. Can a doctor be God? of course not. 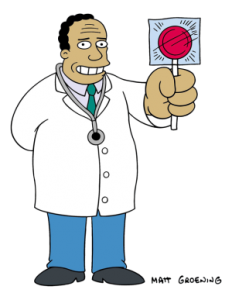